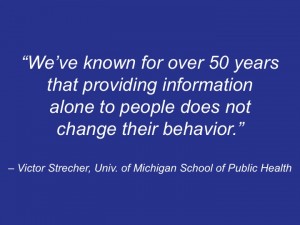 After nearly a decade of examining the adherence challenges and interventions of multiple disease categories, it’s become apparent that the pharmaceutical industry inherently believes that it can change patients’ adherence behavior behavior just by providing information. In our adherence analyses, we consistently see companies generating reams of new product or disease information intended to educate patients on the importance of adhering to therapy and the potential risks of non-adherence. This level of time and monetary investment is a clear indicator that marketers believe that awareness (or ignorance) is the primary contributing factor to the non-adherent behavior they are trying to mitigate.

Unfortunately, if this approach is the sum total of your adherence mitigation strategy, you’re likely wasting your money. Don’t believe me? Well, let’s consider an adherence topic a bit closer to home. END_OF_DOCUMENT_TOKEN_TO_BE_REPLACED

Adherence Curve Never Gets Better Than the Pivotal(s)

Of all the predictive questions one faces in launching a new biologic or pharmaceutical product, the ceiling of your product’s adherence curve may be one of the easiest to tackle with a high degree of accuracy. The answer to this question is buried within your clinical study report(s).

The fact is that the ceiling for your adherence curve is revealed by carefully examining the ITT (intent to treat) analysis by time increment, preferably monthly for most brands. Once you’ve plotted this curve, you can safely assure your Senior Management that it won’t get any better after launch.

But wait, why can’t your adherence curve get any better?

What next? Pick up the phone and introduce yourself to the clinical study coordinator for the site that had the best percent completion for your Pivotal. I’m confident you might learn a few things!

We have previously discussed the dangers of relying on just a co-pay card to serve as your adherence strategy. Despite this, I believe the co-pay card is still an important tool in the marketing armamentarium.

However, I’ve begun to notice that because the co-pay card is no longer the new, ‘bright shiny object’ among most marketing and sales teams, its perceived efficacy is believed to have waned. I’m here to tell you that this belief of the Co-Pay Card being ‘played out’ only exists within the minds of manufacturers.

Why do I say that? In a recent ROF study of patients in a symptomatic, heavy DTC marketing category, we found that most patients have not only not used a co-pay card, but many are not even aware they exist for their medications. Here are some of the topline results:

Note that all the participants in the study were on a prescription product, many of which currently offer co-pay cards.

The results of this study illustrate that more diagnostics are needed before we can conclude that co-pay cards are played out. The high number of people not using co-pay card could be due to a variety of factors such as low awareness, ineffective promotions, etc. It’s tempting to move on to the next ‘bright shiny object’ but conducting the right research on your existing set should be the first order of business!